Finalist for the 2011 Seymour Medal 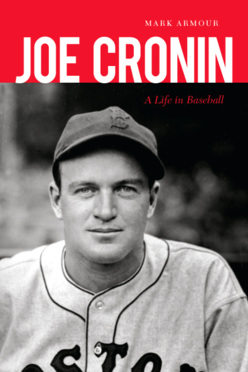 "Joe Cronin had an incredible baseball life, and Mark Armour has chronicled it every step of the way, in a rich, detailed biography that expertly takes you through the game’s decades. This is a book that belongs in every baseball fan’s library.”  —Bill Reynolds, author of ’78: The Boston Red Sox, a Historic Game, and a Divided Cityand Fall River Dreams

"For so many decades, Joe Cronin has defied the ambitions of biographers ... until now, as Mark Armour finally brings us a revealing portrait of this towering figure in the game's history." — Rob Neyer, ESPN.com

"Early in his Hall-of-Fame playing career, Joe Cronin became a longtime player-manager, and later ascended to the offices of general manager and league president. Mark Armour’s book is as comprehensive as Cronin’s career, and his treatment is both thorough and (equally important) very readable.” — Bill Nowlin, author of more than 20 books on the Red Sox, including Red Sox Threads.

"In this engaging, well-researched biography, Mark Armour perfectly captures both the details and the major themes that shaped Cronin and baseball." — Daniel R. Levitt, author of Ed Barrow: The Bulldog Who Built the Yankees' First Dynasty.

“Mark Armour has given us a fully researched and well-written account of Hall of Famer Joe Cronin’s half-century in baseball.”—Lyle Spatz, co-author of 1921: The Yankees, the Giants, and the Battle for Baseball Supremacy in New York, and author of Bad Bill Dahlen: The Rollicking Life and Times of an Early Baseball Star.

More reviews can be found here.

You can purchase this book via the publisher or at Amazon.com, among other places.